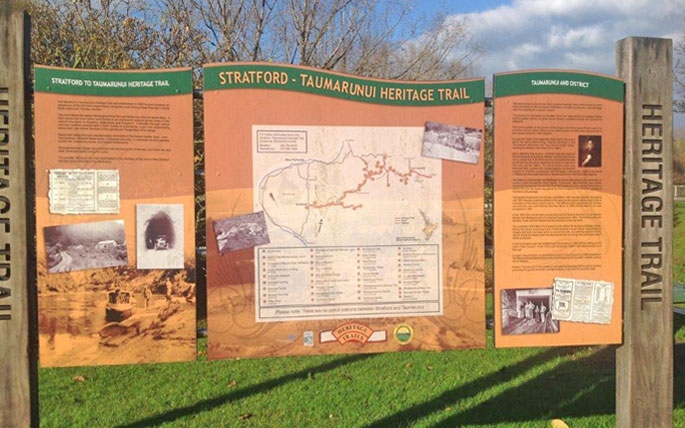 Taumarunui's central location in the Ruapehu District means many exciting attractions and activities are close by, throughout the mountain peaks and forest parks of the World Heritage Tongariro and Whanganui national parks.

Advice and information on all activities in and around Taumarunui and the national parks is available at our reception. Please ask us for more information and suggestions of how to get the most out of your stay while in the King Country. 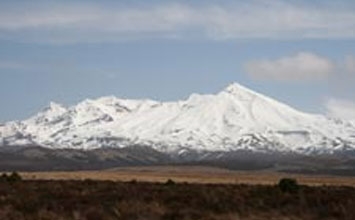 Fancy skiing on an active volcano? In just 45 minutes you can drive from Taumarunui to one of New Zealand's largest and most developed ski fields and do just that. Whakapapa, on the slopes of magnificent Mt Ruapehu, has scenic chairlift rides all-year round offering unsurpassed and spectacular views over the central North Island. World-class facilities catering to beginners and more advanced snow sports enthusiasts are available here and at Turoa Ski Field, on the south-western slopes of Ruapehu, approximately a 90-minute drive from Taumarunui. The ski season usually runs from late June to mid-November, sometimes operating until December.

After time on the slopes, opt for a round of golf, some fishing or simply unwind in the best way possible in relaxing hot pools located in and around Taumarunui. 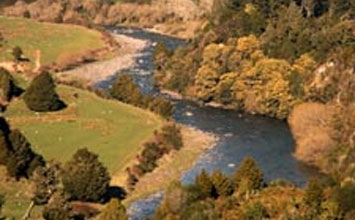 The Ruapehu District and its surrounding areas boast world-class wilderness fishing. This area is an angling mecca from lake fishing to challenging headwaters in the backcountry wilderness. Taumarunui has it all.

Whakapapa River is the largest tributary of the Whanganui River and one of New Zealand's finest trout fisheries. The Whakapapa flows through native forest alternating between turbulent rapids, deep pools and long boulder runs. There are a few easy places to cross but beware that caution is required. The middle reaches around Owhango fish well with good access through Owhango reserve. Please be aware that Upriver from Owhango there is considerable private land. It is advisable to seek permission from the landowners or use a reputable guide who has legal access. Licenses can be purchased locally and at Department of Conservation offices. 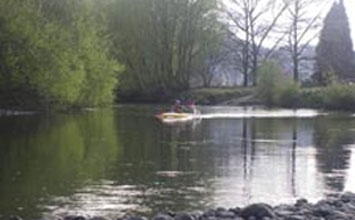 The Whanganui National Park is the gorgeous backdrop for the vast Whanganui River. This river is the longest continuous navigable river in New Zealand. Its gentle gradient and 234 km stretch is perfect for wonderful scenic canoeing, leisurely boating or, if you prefer a more high-octane experience, jet boating might be for you. Taumarunui is the perfect base at the heart of the Twin Rivers, where the Ongarue and Whanganui rivers converge. Please ask us at reception for more information on local tour operators. 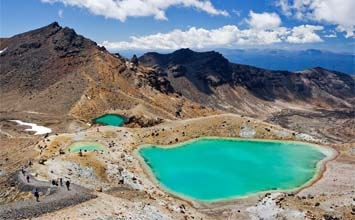 Described as one of the best one-day treks in New Zealand, from alpine meadow to mountain summit with stunning volcanic features along the way. You will walk across a lunar landscape of craters, scattered pumice, active volcanoes, mountain springs, lava flows and emerald lakes; all testament to the forces that were unleashed to create this volcanic desert. It will take about eight to nine hours in total, be sure to allow time for photographs and any sidetracks, lunch and breaks.

The crossing is best done from National Park Village where you can monitor the weather and enjoy other mountain activities if you have to wait for better weather. For the fit, you have a chance to summit Mt Ngauruhoe or Mt Tongariro. Your host will arrange a shuttle to and from the track. It is not secure to leave cars at the track ends. Always be prepared for a change in the weather by taking clothing for all conditions. The walking season is usually from November to May, but if you want to do the crossing in winter be prepared and use a guide, who will provide crampons and an ice axe. 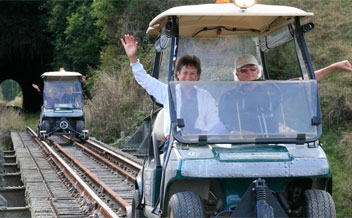 New Zealand rail tours with a difference departing from Taumarunui, Whangamomona and Stratford!

Nestled within the deep hidden valleys of New Zealand's Forgotten World Highway is the ultimate way to explore rural New Zealand. Travel along decommissioned railway lines, through tunnels, over bridges and rivers and to townships that time forgot.

There are plenty of photo opportunities along the way while taking in ever-changing vistas with our semi guided NZ rail tours.

The rail carts have been designed to be self-driven on the line to give visitors a unique experience of the distinctive and beautiful central North Island country. 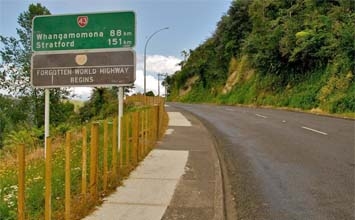 One of the AA Traveller's 101 must-do's for Kiwis, the Forgotten World Highway, or State Highway 43, is a heritage trail exploring one of New Zealand’s most secluded roads between Taumarunui and Stratford.

The highway winds its way over four mountain saddles, and past 20-odd highlights, such as the 180-m one-way Moki tunnel, spectacular Tangarakau Gorge, Mt Damper Falls and the tiny settlement of Whangamomona, a small village declared a 'republic' by its residents back in 1988.

This backcountry township celebrates its independence every second January with around 6000 people flocking to the village to participate in sheep racing, gumboot throwing and whip cracking.

Please note: the Forgotten World Highway is 150km and there are no petrol stations along the way, so be sure to fill up your tank before you set out. 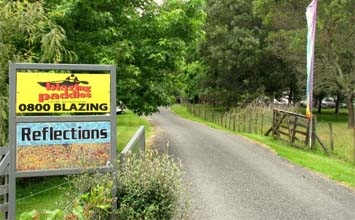 Have an unforgettable experience as you share the Whanganui River experience through the Whanganui National Park. Blazing Paddles pride themselves on attention to detail and offer refinements that no other Whanganui River canoe operator provides, all at a very competitive price. Their only objective is to make sure all of their clients have the best possible time. 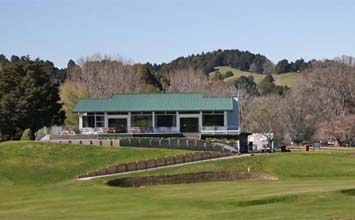 The adoption of the Scottish word "Tarrangower" gives Taumarunui's Tarrangower Golf Club a link to where the game first started. Those who play on this scenic 18-hole course seem to find themselves returning again to enjoy the serene beauty of this course. This golf course is recognised being amongst the finest in New Zealand. 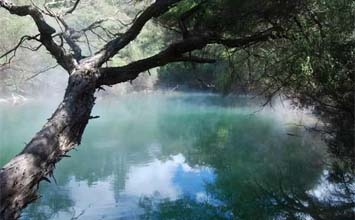 For something different take a picturesque 40-minute drive and you will find the natural thermal hot pools of Tokaanu, a miniature geothermal wonderland. 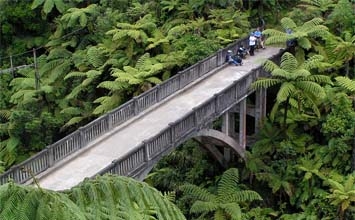 The Bridge to Nowhere

The bridge was left to the ravages of nature when the Mangaparua farming settlement was abandoned in the early 1900s. This is a 40km track between Whakahoro and Mangapurua landing on the banks of the Whanganui River and usually takes three days to do the walk.

There are no huts however, but there is an abundance of ideal campsites on open grassy flats and small side streams to provide ample water. Arrangements with a river jet can be made for the return trip to Whakahoro or to transfer to the Matemateaonga Walkway. 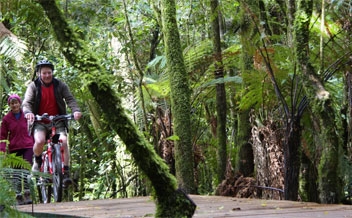 Experience the feeling of being suspended in time, as you begin your ride along the 85km Timber Trail. Boasting some of the highest and longest suspension bridges in New Zealand, the Timber Trail weaves its way through ancient forest, across ancestral lands of local Maori Tribes, and along part of the historic Ongarue Tramway.

The Timber Trail is nestled in Pureora Forest, between Lake Taupo and Te Kuiti, in the Central North Island. Begin your journey at Pureora Village in the north, ending at Ongarue in the south. Experience the full grandeur of the forest, open to cyclists and walkers alike. Whether a day out with the family, a group ride (or walk) with like-minded people, or maybe even a team building experience, The Timber Trail offers something for everyone. 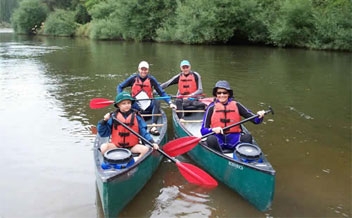 The Whanganui River Canoe Journey is a great adventure for all.

The trips are ideal for those wishing to have a relaxing holiday, but include enough challenges to create a fun experience. It's a great chance to really get away from it all for a few days in perfect remoteness. No telephones, no televisions. Just you and nature.

They cater for a great variety of people from all age groups with the emphasis on enjoyment; so a moderate level of fitness is all that is required for the Whanganui River Canoe/Kayak journeys.